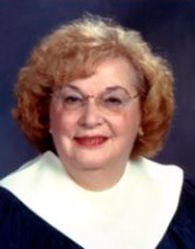 Joyce Parks was born up in High Shoals, Georgia, a very small town about 15  miles west of Athens. She has lived in Lawrenceville, Georgia for over  50 years. She took lessons from second grade through high school from a  lovely lady, Suzanne Hattaway Shockley.  She was a fine pianist although  Mrs. Shockley had stopped performing by the time Mrs. Parks was  studying.  Mrs. Shockley not only taught piano, but she taught about  composers and the meaning of the music. She served as Mrs. Parks'  greatest music influence.
Joyce describes her initial feelings about practicing. "I have to say that I did not like to practice or  perform as I was growing up. At about age 16 I began to get more serious about it and worked harder. I started playing in church when I  was 10 years old. "
After studying with Mrs. Shockley, Joyce studied for two more years in college, played for church and some small  groups as well as soloists. By this time, Joyce began studying the  organ. After getting married, Joyce studied pipe organ with a good  teacher in Decatur who also inspired her to be a good musician.
Joyce described her professional experience in detail. "I played my first  wedding when I was 18, for a close friend.In college, I played for  church services at the college.  My first real professional job was as  accompanist for the Gwinnett Civic Chorus, formed in 1983. I continued  with them for 15 years. I began to play for soloists in the group as  well. I started my first paid church job in 1963. I continued with  that through the years even as I taught public school. I have just retired after over 50 years as a church musician and organist."
Joyce discusses the formation of BJ's Chorale, her choral group formed in Lawrenceville, Georgia. "Bob Ferrell and I formed BJ Musical Productions in 2003 because we wanted more opportunities to perform music we love, and we wanted to share  beautiful music with the community. The BJ Chorale grew out of this and  has been a joy. We have accomplished a great deal: Several performances  of Dubois’ Seven Last Words, Faure’s  Requiem, Amahl and the Night  Visitors, Hansel and Gretel, all the while performing two or three  concerts a year. The group is composed of both professional and amateur  musicians who loved to share their music. We also sponsor an Annual  Community Messiah Sing-A-Long. Our goal is not so much to make money  (we don’t) but to give back to our community."
Joyce  also describes how music changed the direction of her life. "I did not  dream I would do so much with church music or community groups. I could say it just fell into my lap.  So many wonderful opportunities have  come my way.  I have been privileged to accompany for some notables as  well, including Donald Neuen, Ann Howard Jones, as well as fine local directors.  I became active in the American Choral Directors Association  as well as the Presbyterian Association of Musicians.  PAM presented  many superior conferences from which I learned so much about both  worship and music. There I received the inspiration that has kept me  going through the years."
Joyce has some great advice for upcoming musicians. "If you love music and  decide to take lessons, stick with it for a year or two to see if it is  really what you want. There is hard work to be done learning scales and  theory, and you may not see a use for it because you just want to  play. Knowing the fundamentals will help you to be a better musician. If you were training for a sports group, you would have to do all the exercises. It is the same with music. Some people can play “by ear”, and  they can play things they have heard fairly easily. Even so, you need to learn to play and read music, because you will be able to do so much more.  Your good ear will be important, but you can play anything you  can read and not be confined to just what you have heard.
Listen to beautiful music in general and with your chosen instrument in  particular. In time, if you work seriously, you will be able to play  what you want. Remember that any one that you hear play well has done a  lot of work and practice to reach that point. When you do reach it, you will have the greatest feeling.  You will love what you do and will keep at it because you love it.  No one will have to tell you to  practice anymore."
Joyce Parks exemplifies excellence. Thank you, Mrs. Parks, for being an inspiration through music!
​​