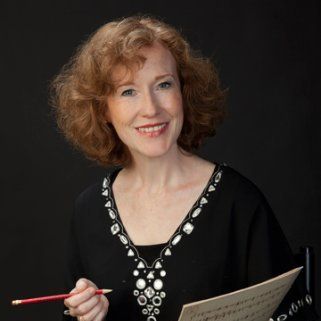 Composer and violinist Mary Alice Rich has performed with acclaimed orchestras and has notably composed award winning classical music performed throughout the country. She is from a small, rural town in Minnesota called Fairmont. As a youngster, Mary Alice admired her older sister who  played the violin in the Minnesota All State Orchestra for 3 years. Her  interest peaked, and Mary Alice began studying the violin in the 5th  grade. Mary Alice described her educational background with us. "I have to say that our town was lucky to have an orchestra program, and the two teachers there--Donald Peterson and, later, Linda Thompson--were both wonderful teachers. I was also very fortunate to study with Marilyn Bos at Mankato State University while I was in high school. She was the one to send me on to the University of Illinois-Urbana to do my Undergraduate Violin Performance Degree with the world famous pedagogue Paul Rolland. After his death, I did my Master's Degree under concert artist Sergiu Luca. All of these teachers shaped me as a musician, teacher, and as a person. I owe so much to each of them."
Life took an unexpected turn for Mary Alice in the middle of her career.  After performing with the Tulsa Philharmonic, Fort Worth Symphony, and Dallas Opera Orchestra in addition to teaching violin at Texas A&M  Commerce, she was diagnosed with crippling condition known as Focal Dystonia. At the time, the diagnosis devastated Mary Alice because it limited her ability to perform. However, she was able to turn her  musical expression into a new direction through compositions.
Mary Alice describes what happened to her a few months after her diagnosis. "After watching a movie about George Gershwin's life, I had a dream in which Gershwin told me that maybe I could try to write music. It sounds laughable, and I actually do have to laugh over it myself, but when I woke the next morning, I knew that that's what I was going to try to do.  That was 25 years ago. I've been writing ever since, and again I have  been blessed to have studied privately with superb teachers: Professors/composers Jack Waldenmaier (SMU), Ted Hansen (Texas  A&M-Commerce), and Winston Stone (University of Texas at Dallas). As before, these teachers have made huge impact on my life. When Dr. Stone guided me through the writing of my opera Wading Home, I dedicated it to him in appreciation for all he brought to the piece."
As the saying goes, Mary Alice turned lemons into lemonade in her music career. She is known throughout the world who's music has touched many.  When asked about what advice she would give to young musicians, Mary Alice gave insightful advice. "If you can imagine yourself doing  something else as a profession, then do that, but keep making music on  the side for the joy of it. On the other hand, if you can't conceive of doing anything else besides music, then go into music as a profession with the understanding that it may not be exactly as you have envisioned it. That's ok. As I can attest, life gives us bumps in the road. But if you truly are called to be a musician, you will find a place for  yourself. There is no shame in having a "day job" to pay the bills or in creating your own opportunities if some doors are closed to you. Be open to making music any way that you can---it is a God-given gift which  we must develop and then share. There is a wise saying that has been a  big help to me. Make plans but don't plan the results. It's an adventure."
This is some of the best advice a person could give to any musician. Thank  you Mary Alice for not giving up when the waters were unchartered, and thank you for sharing music to the world!
​